HomeBlogEdiCue v4 Has Been Released
﻿

EdiCue v4 Has Been Released

The goal for software developers is to create applications that are simple to use while containing the flexibility and functionality required for its user base. This is especially true when the application interfaces with another application. In this case, the primary application needs to be able to communicate with the secondary effectively, so that data is exchanged correctly, without the need for the user to make selections while importing or exporting data. This has been the driving force behind the updates made in EdiCue v4.

One of the bottlenecks that EdiCue has had since its inception has been importing ADR cue data from Pro Tools. This process has relied on the user manually exporting a text file from Pro Tools and making the correct selections during the export and subsequent import into EdiCue.

To streamline this process, I set aside a major portion of 2021 to write the code that can read and write Pro Tools session (.ptx) files. The result of this investment is EdiCue can now not only import ADR cue data directly from a PTX file, but also export cue data in a PTX file.

On the export side, I am pleased to report that EdiCue now exports cue data in empty clip groups – the most requested feature our users have made. Now EdiCue no longer needs to create audio clips that references a mute WAV file. On top of this, during export you can now define the color of each clip being exported by the clip name. By default, all clips containing the '[TBW]' tag are exported red. 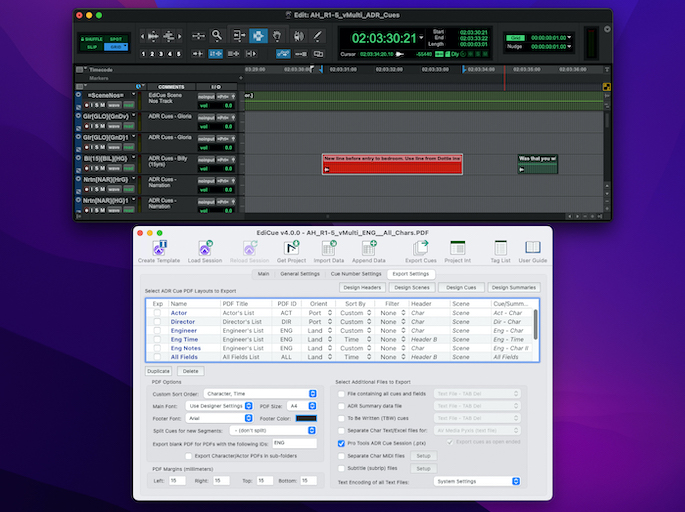 In tandem with this Pro Tools development, I also worked with Steinberg to add support for Nuendo. Looking to provide the best user experience possible, we were able to formulate a protocol that allows the two applications to seamlessly transfer ADR cue data in the background without the need to save or load data from files. I’m grateful to Steinberg for providing this feature-rich interface to allow EdiCue to interact with Nuendo in this way. 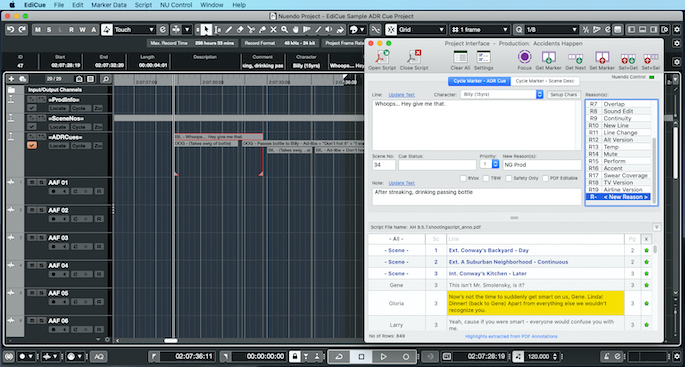 Rather than store the cue data in audio clips, the data in Nuendo is stored in cycle markers which extends the existing ADR features of Nuendo. Once the cues have been created with EdiCue, they are ready to record directly with the Nuendo Marker window.

In addition, all cues can be imported directly into the EdiCue main window to export EdiCue ADR cue sheet PDFs or any other file type it can export.

For studios that record their ADR with Nuendo, they now have a way to load the ADR cue data from EdiCue PDFs, if the production sends them this type of PDF to record an actor. To do this simply load the EdiCue PDF into EdiCue and select the menu item: File > Send Data to Nuendo Project. This will create an 'ADR Cues' marker track with the cue data stored in cycle markers ready for record.

To try EdiCue v4 for yourself, download the installer from the Download page. Once installed, run it and click ‘Try’ to activate a three day trial license.

For existing EdiCue full license holders an upgrade from v2 or v3 can be purchased from our web store. To transition to the new version, EdiCue v4 licenses can activate EdiCue v3.4.0+. Rental and EDU bundle license holders do not need to upgrade as these licenses automatically run both versions.